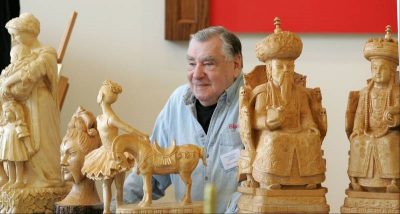 Shelly Weiser sees himself as a late-bloomer when it comes to artistic endeavors.

The Naperville man has earned acclaim in the woodcarving world for his detailed work, but it was a reputation that didn’t start until well after he retired from his retail job.

In the last 15 years, Weiser, who turns 90 this month, has won enough blue ribbons and top honors to fill 12-by-18-inch long plastic container.

Daughter Brayon Miklasz, also of Naperville, said her father is far too modest.

Shelly Weiser sees himself as a late-bloomer when it comes to artistic endeavors.

The Naperville man has earned acclaim in the woodcarving world for his detailed work, but it was a reputation that didn’t start until well after he retired from his retail job.

In the last 15 years, Weiser, who turns 90 this month, has won enough blue ribbons and top honors to fill 12-by-18-inch long plastic container.

Daughter Brayon Miklasz, also of Naperville, said her father is far too modest.

“I’m not surprised by his ability. He was always artistic. He was working or with the family and didn’t have the time,” Miklasz said.

“I was surprised by his prolificness,” she said.

Weiser estimates he’s probably carved about 100 pieces. He doesn’t keep track or title them, nor does he sign or date every piece.

Most of his works are spread around his house and decorate the family room.

“The house is starting to look like a museum,” Miklasz said.

While he gives some carvings away as gifts, Weiser is adamant he doesn’t do it for the money.

Over the last 15 years, Weiser has displayed tables of his creations at art and carving shows throughout the Chicago area and in other states.

The nonagenarian said it’s time to cut back because he no longer has the stamina to haul his pieces everywhere.

His final big show was Saturday during his 90th birthday celebration, where family, friends and fellow woodcarvers got a private look at many of his creations.

It’s seems fitting his last hurrah was at the Morton Arboretum in Lisle, where trees, art and nature are on display daily.

Near a window overlooking the grounds outside the arboretum’s Thornhill Education Center was his favorite piece: a relief of hummingbirds and dragonflies among a bed of flowers. The carving earned him fame and top honors at the 2007 International Woodcarvers Congress.

Miklasz said her father first was able to express his artistic side in the 1960s and ’70s when he would set up the front window displays at the Andrew Geller shoe store on Michigan Avenue in Chicago, where Weiser worked as a salesman.

“Those were the days when Marshall Field’s had the elaborate window displays,” Weiser said.

Every two weeks, the store owner would pay two men from New York to fly in and decorate the window.

Weiser recalls placing shoes on Victorian buildings he’d carve from foam and hanging shoes from trees in a forest he crafted.

Despite the window dressing opportunity, work and family life cut into any further creative pursuits until he retired from Neiman Marcus at age 72.

Even then, it took two years for Weiser to find his woodcarving niche. It wasn’t until he attended his first North Suburban Carvers Club meeting that he was hooked.

“I knew I could do this; I always liked art,” he said.

At his second meeting, club members gave Weiser the contact number for master carver JR Cadawas in Chicago, and at 75, Weiser started studying the craft.

In no time, he created a relief similar to a first century deity with ram horns.

From there, he moved into a Chinese sculpture phase, carving an emperor seated on dragon throne and an empress on a throne of phoenixes.

Much of Weiser’s work is inspired by sculptures, photos or figurines he’s over the years.

The idea for six different carvings of women dancing in the 1920s came from studying an art deco book he borrowed from the library.

“I am really fascinated with that period of time,” Weiser said.

Several of the pieces of his art deco collection earned awards at 2016 International Woodcarvers Congress, which is considered one of the most prestigious, competitive woodcarving shows.

Weiser uses basswood because it’s much easier to create details, like the stubble on a face and the stitching on the shirt in his cowboy carving.

“All the carvers like it. It’s the softest of the hardwoods. The grain is very tight,” he said.

The wood is handpicked by Weiser at Kirkland Sawmill, a lumber mill in the town of Kirkland just north of DeKalb.

Although the reliefs can made from a single piece of wood, many of his human sculptures are made by laminating four to five pieces of wood together, a process he learned from Cadawas.

As long as his hands remain steady, he said he’ll continue carving. His current project is a large chicken.

In his spare time, Weiser teaches beginning woodcarving classes to children and senior citizens through the Naperville Park District.

“Woodcarving is becoming a lost art,” he said. “All our club members are old people.” 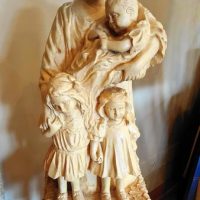 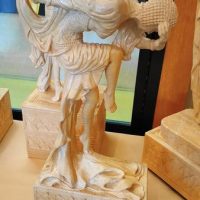 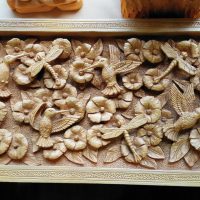