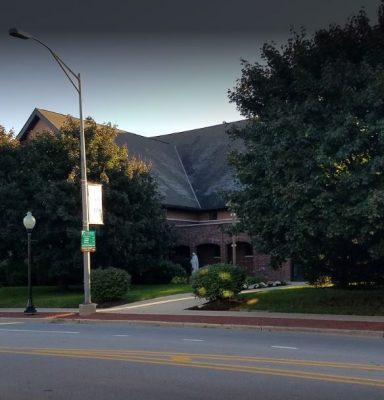 Christmas Day – 1923
Holy Trinity Parish was founded as a mission on Christmas Day 1923. Priests from Downers Grove aided by the Franciscan Fathers of Mayslake conducted services for the next 15 years.

Spring 1938
Cardinal Mundelein of Chicago appointed a resident pastor to Holy Trinity. Property was purchased on our present site and a building on the property was renovated for a rectory. The rectory was the Gregg House which is on the Park District property on Linden Street and serves as the Westmont Historical Society.

1958
A basement church was added which was located in what is now our school. The colonial church was used until 1989 when it was razed to prepare for the construction of the present church, which was dedicated December 5, 1992. The parish continued to grow so more property was needed.

June 2005
The unfinished basement of the church was completed into what is called Holy Trinity Hall.

August 2008
The 1950 wing of the school was renovated and renamed the Mother of Life Wing. It houses the Sacred Heart Chapel of Eucharistic Adoration, a meeting room, an office and the parish pantry. Also the former convent was razed to make way for the planned construction of our Parish Center and Gym.

Summer 2010
The renovation of our church was completed. Our Heritage of Faith continues as we anticipate the building of our parish center and gym in the future. We thank all our parishioners for their generosity during all our construction phases. Without them none of this could have been accomplished.