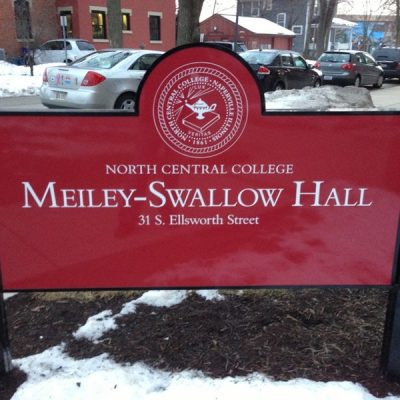 The thrust stage theatre in Meiley-Swallow Hall is ideal for intimate musical and theatre productions, as well as speakers, panel discussions and presentations. The cozy setting is home to many of the College’s theatre department productions, studio theatre productions and summer jazz concert series and is open for use by community artists and groups.

Through its partnership with Anderson’s Bookshops in Naperville—one of the nation’s leading independent bookstores—the theatre at Meiley-Swallow Hall has hosted author talks by such notables as Bill Bryson, “Weird Al” Yankovic, Antonio Sacre, Garth Stein and Donald Miller.

Meiley-Swallow Hall is named in honor of the late Judy G. Meiley Swallow Stevenson, an entrepreneur and business leader, life trustee and generous benefactor to North Central College. The building was purchased with funds from the estates of two North Central College alumnae, sisters Marie Gantzert of the class of 1933 and Bernice Gantzert of the class of 1938.