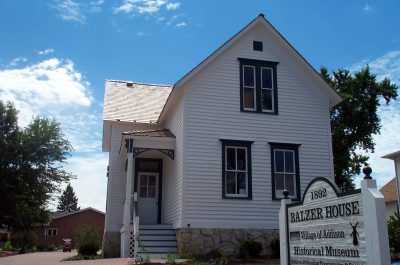 To mark the centennial of the U.S. involvement in World War One, the Addison Historical Museum is presenting a special exhibit this summer. Learn about what caused the war, how local men served their country, and how we remember this war.

WWI began in Europe in the summer of 1914, but it was not until April 6, 1917 that the United States joined its allies-Britain, France and Russia against the central powers of Austria-Hungary, Bulgaria, and Germany.  In mid May, the American government set up the Selective Service System to temporarily increase the U.S. Military establishment. The System was responsible for selecting me for induction into the military service, from the initial registration to the actual delivery of men to military training camps.

During the War, there were three registrations.  The first one was held on June 5, 1917 and was for all men between the ages of 21 and 31.  The second registration occurred on June 5, 1918 and registered those who had attained age 21 after June 5, 1917. The third and final registration was held on September 12, 1918 for men age 18-45.  Research of online WWI registrations found approximately 100 male residents from Addison who answered the call to register.  Of this number, only 4 were noted as being inducted “into camp” or service.

Learn more about the service of these 4 Addison men and view an authentic WWI Army uniform.  Also see a period newspaper proclaiming at long last,  the end of the war and examples of silk WWI souvenir handkerchiefs soldiers sent or brought back home to remember their service.

Three parking spaces located at Century House garage off of May Street. On street parking.