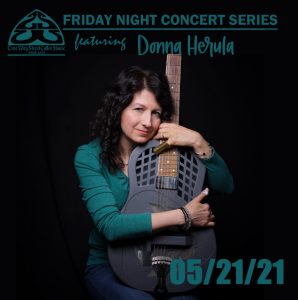 Donna Herula is a Chicago-born blues singer, songwriter and acoustic slide guitarist that has a passion for playing traditional country blues, Delta Blues, early Chicago Blues, folk, roots, and Americana in addition to contemporary and original songs.  Her sound combines her love for music of the Deep South and Chicago with her love of blues guitar improvisation.  Acoustic Guitar Magazine named Donna one of the “top 10 up and coming resonator guitar players” and featured her in an article, “Down and Dirty: 10 contemporary resonator players talk about their love for that nasty sound.”  In October 2016, Donna was inducted into the Chicago Blues Hall of Fame.

Donna is a regular performer at Buddy Guy’s Legends in Chicago and has opened for Buddy Guy multiple times.  She is also a teacher at the Old Town School of Folk Music in Chicago where she teaches Acoustic Slide Guitar, Blues and Americana Fingerstyle and Electric Slide Guitar group and individual lessons.  Donna was the headliner of the 2014 Durban International Blues Festival in South Africa and has performed at the Chicago Blues Festival three times and King Biscuit Blues Festival in Helena, Arkansas twice, including solo tributes to Robert Nighthawk, Sister Rosetta Tharp and Johnny Shines. She was also the co-winner of the 2010 and 2011 Chicago Blues Challenge, solo-duo category.

Donna has provided numerous educational blues programs at libraries and has also performed at many music festivals, art festivals and concert series.  She plays as a soloist, in a duet or band depending on the venue. Donna has been inspired by blues singers, guitarists and songwriters, including Son House, Rory Block, Lucinda Williams, Johnny Winter and Lyle Lovett.

Please donate! There is no admission charge for the event, but please tip the artist. Use the button on the Two Way Street website www.twowaystreet.org to leave a donation for Donna. Please help support musicians and keep their songs flowing during these difficult times.