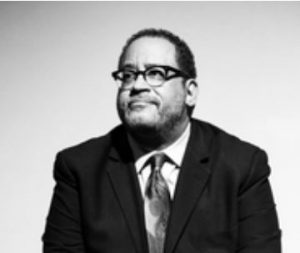 To obtain your tickets to the Wednesday, December 2 Anderson’s event, please click here. There you will get information and instructions to join in the presentation.

About the Book:
From the New York Times bestselling author of Tears We Cannot Stop, a passionate call to America to finally reckon with race and start the journey to redemption.

The night of May 25, 2020 changed America. George Floyd, a 46-year-old Black man, was killed during an arrest in Minneapolis when a white cop suffocated him. The video of that night’s events went viral, sparking the largest protests in the nation’s history and the sort of social unrest we have not seen since the sixties. While Floyd’s death was certainly the catalyst, (heightened by the fact that it occurred during a pandemic whose victims were disproportionately of color) it was in truth the fuse that lit an ever-filling powder keg.

Long Time Coming grapples with the cultural and social forces that have shaped our nation in the brutal crucible of race. In five beautifully argued chapters—each addressed to a black martyr from Breonna Taylor to Rev. Clementa Pinckney—Dyson traces the genealogy of anti-blackness from the slave ship to the street corner where Floyd lost his life—and where America gained its will to confront the ugly truth of systemic racism. Ending with a poignant plea for hope, Dyson’s exciting new book points the way to social redemption. Long Time Coming is a necessary guide to help America finally reckon with race.

About the Author: Michael Eric Dyson is one of America’s premier public intellectuals and the author of more than twenty books, including the New York Times bestsellers JAY-Z, Tears We Cannot Stop, and What Truth Sounds Like. He is a contributing opinion writer for the New York Times and a contributing editor of ESPN’s The Undefeated. Dyson is winner of two NAACP Image awards and the recipient of the 2020 Langston Hughes Festival Medallion. Former President Barack Obama has noted: “Everybody who speaks after Michael Eric Dyson pales in comparison.”

About Anderson’s Bookshop: Anderson’s Bookshop is a 6-generation family-run neighborhood independent business with locations in Chicago’s western suburbs. The company includes a toyshop and school bookfair division. Recipients of dozens of honors, Anderson’s Bookshops share a passion and knowledge of books and of building community through great reads. Anderson’s Bookshops are located in downtown Naperville at 123 W. Jefferson Ave. and in Downers Grove at 5112 Main St. For additional questions and information, visit AndersonsBookshop.com.

This is a ticketed event and a purchase is required to attend.  All tickets include a signed copy of the new book, Long Time Coming.