Please note, this event has expired. 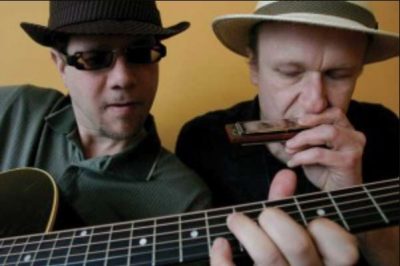 The blues and roots music duo— Joe Filisko and Eric Noden make an unforgettable impression. Their jaw-dropping virtuosity enables them to create more layers of sound and feeling than most full bands can summon, and both are high-energy, ultra-rhythmic performers. The collective result— in both their live shows and their recordings— are charged, dramatic performances that are simultaneously powerful and sophisticatedly subtle.

“Two marvelous musicians who have captured not only the

The blues and roots music duo— Joe Filisko and Eric Noden make an unforgettable impression. Their jaw-dropping virtuosity enables them to create more layers of sound and feeling than most full bands can summon, and both are high-energy, ultra-rhythmic performers. The collective result— in both their live shows and their recordings— are charged, dramatic performances that are simultaneously powerful and sophisticatedly subtle.

“Two marvelous musicians who have captured not only the sounds but the emotional spirit of some of the richest bloodlines of American music.” — Kim Field, author of Harmonicas, Harps, and Heavy Breathers

“Joe Filisko and Eric Noden make a thoroughly convincing case that this music is the real deal and their spirited performances make it sound both fresh and contemporary.” –Dirty Linen

“Eric and Joe are possessed by the spirits of Howlin Wolf, Sonny Terry, Robert Johnson, Johnny Woods, Sonny Boy Williamson, Gwen Foster and transported listeners back to the 1920’s Delta.. We love Eric and Joe. Please send them back.  —–Mickey Raphael, harmonica player for Willie Nelson
Just a few short years after their first meeting, Filisko and Noden are displaying their compelling musicality on the world stage. They’ve performed at the legendary Chicago Blues Festival, the Paramount Blues Festival in Grafton, Wisconsin (where some of the greatest of the early blues recordings were made); Sweden’s Eslov Blues Festival; and the Festival Ecaussines in Belgium. The duo also recorded the theme song for the “Sweet Folk Chicago” on the legendary Chicago radio station WFMT. Joe and Eric are expert practitioners of harmonica and guitar styles that defined the blues in its earliest days but are now all too rarely heard. Both of these standout performers also teach and make it a point to share the insights they’ve gained from two lifetimes of deep research into the history of the music. German harmonica master Steve Baker invited the roots duo to teach and perform at the Harmonica Masters Workshops in Trossingen, Germany (home of the harmonica manufacturer Hohner), in 2010, 2011, 2012 and 2014. The pair has also offered joint workshops and performances at Australia’s Playmakers Festival, the Harmonicales Festival in France, and at the Old Town School of Folk Music in Chicago.

Joe Filisko and Eric Noden’s latest recording, “On the Move” which follows “Missed Train Blues” and “I.C. Special” features 12 knockout original tunes that demonstrate how they are using their mastery of classic styles to create an exhilarating, new approach to the blues. The recordings of Filisko and Noden document their joint journey from total immersion in the richest and most complex classic blues stylings to vibrant, original, 21st-century music that moves the blues forward. Each performer brings unique qualities to the duo.

Joe Filisko
Joe Filisko is a master of all the classic blues harmonica styles. As Dennis Gruenling of Blues Review says, “Joe Filisko could be the best prewar blues harmonica stylist in the world today.” Kim Wilson of The Fabulous Thunderbirds agrees: “Joe is one of the rare talents on the instrument of the harmonica. He is the guy that does what most players can’t even think about doing.” In addition, Jerry Portnoy who has played harmonica with Muddy Waters and Eric Clapton says, “Joe plays to the strengths and unique capabilities of the instrument and employs the full range of tonal colors, trills, flutters, chord rhythms, and other special effects that make his playing so expressive – all in service of the music. My admiration for his skill and musicianship is boundless.” Filisko is not only an accomplished performer, but a skilled harmonica craftsman as well. His highly prized work and expertise has earned him the rare honor of having his name on one of Hohner’s instruments— the just-released specialty harmonica, the Thunderbird. Furthermore, Filisko’s customized Marine Band harmonicas have been played by many world renowned artists including Charlie Musselwhite, Kim Wilson, Howard Levy, Rick Estrin, Jellyroll Johnson, Buddy Greene and Gary Primich. Filisko’s harmonicas are also used by celebrities Bruce Willis, Steven Tyler and former President Bill Clinton. Joe has taught and performed on 5 continents. He was awarded the “Harmonica Player of the Year in 2001 by the SPAH organization. Joe performed at the 2006 Country Music Hall of Fame, Medallion Ceremony for the induction of DeFord Bailey. In addition to his recordings with Eric, Joe also has a CD of classic harmonica material available entitled “The History of the Blues Harmonica Concert”. The disc is collaboration with harp players David Barrett and Dennis Gruenling. For more info visit www.filisko.comand  www.filiskostore.com

Eric Noden
Eric Noden is a master bluesman in his own right. Deeply rooted in the music of 20’s & 30’s blues pioneers, Eric Noden’s percussive guitar work, timeless songwriting and well-traveled blues vocals have earned the respect of audiences, critics, and musicians worldwide. The Illinois Entertainer described Eric “As a spiritual heir to Chicago blues guitarists of the ’20s and ’30s like Tampa Red and Big Bill Broonzy. This multi-talented acoustic artist fills an important niche in the city’s mostly plugged-in blues scene.” Similarly, Eric’s mastery was recognized in Cadence: “Intent on mastering older styles while transporting them and us into a new century where the past is not forgotten” The Milwaukee Journal Sentinal adds, “The Chicago-based bluesman makes a National Resonator guitar absolutely wail.” Eric Noden sings, shouts and stomps while conjuring old spirits from the strings of his acoustic guitar. Varying his approach from song to song, Noden draws from a deep well of American music that fuels his high energy performances. His right hand thumb often lays down a driving bass figure that weaves around intricate melodic parts played with his fingers. This style, favored by early bluesmen like Charley Patton, Reverend Gary Davis, and Blind Blake, is one that only a few contemporary bluesmen have mastered. Noden recently produced a CD for blues legend Billy Boy Arnold that will be released the Electro-Fi label. In addition to his recordings with Joe Filisko, Eric has released three solo CDs “55 Highway”, “Midwest Blues” and “The Original” as well as “No Lie” with his band Sanctified Grumblers. For more info visit www.ericnoden.com

* Event durations (if noted) are approximate. Please check with the presenting organization or venue to confirm start times and duration.