ENROLLMENT HAS BEGUN FOR THE 2020 CHAMBER MUSIC CAMP!

Posted by OPUS ; Posted on
DEADLINE : 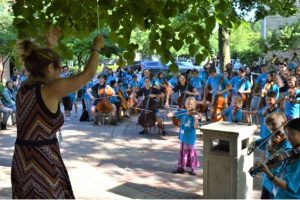 The OPUS Chamber Music Camp, in its 18th year, is for violin, viola, cello, contrabass, flute, clarinet, oboe, harp, and piano studying students from age 8 to 18. The dates are August 2 to August 8, 2020. Classes are held on the campus of North Central College (NCC), Naperville. The final “Listen to Our Young Artists” concert will be on August 8th at Wentz Concert Hall on the North Central campus. Registration is open on OPUS website.

Your registration requires that you submit your Audition Video(s) and pay the $30 application fee. Complete instructions for the admissions process can be found here. The audition requirements are posted on the website under Camp Auditions.  Registration will end on June 12th, 2020. Scholarships are available via application; the deadline for scholarship applications is June 5th.

After acceptance, except those who come as a pre-formed group, you will be matched by your skill level and grade with other campers into a small chamber ensemble of 3 to 5 players and music will be assigned.  Your chamber, orchestra, Flash Mob (if you sign up for it), and some Senior Camp instrument choir music will be made available to you 3 to 4 weeks ahead of the camp for you to practice.

The OPUS Music Camp has various components and classes for parents, siblings, relatives, and friends to participate as well. It is aimed at giving campers the ultimate fun!