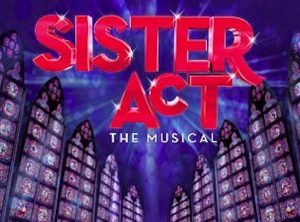 When disco diva, Deloris Van Cartier, witnesses a murder, she is put in protective custody in the one place the cops are sure she won’t be a found: a convent! Disguised as a nun, she finds herself at odds with both the rigid lifestyle and uptight Mother Superior. Using her unique disco moves and singing talent to inspire the choir, Deloris breathes new life into the church and community but, in doing so, blows her cover.

Filled with powerful music, outrageous dancing and a truly moving story, Sister Act has audiences jumping to their feet! A sparkling tribute to the universal power of friendship, Sister Act is reason to REJOICE!

Please sign up for a date.  Plan on 2-2.5 hour audition rotation: choreography, singing, movement, and possible reading. Songs from Sister Act are preferred but not mandatory. Bring your own sheet music if NOT a song from Sister Act. An accompanist will be present. Wear comfy shoes and clothes for the dance portion.

Please bring all conflicts to auditions.

If you want to audition but have an audition conflict, please message the director, Anna Ahonen.

The cast is chocked full of amazing roles for Women of all ages and ethnicities. Men’s roles are also diverse and fun.

DELORIS Van CARTIER: (25-40ish Woman of Color; E3-F#5) An aspiring performer, trying to find both fame and a place in the world. Loud-mouthed and sassy.

MOTHER SUPERIOR: (40’s-70’s; D3-E5) The head of the convent, sarcastic and a bit stiff. Extremely protective of her sisters. Could have a British Accent.

SISTER MARY PATRICK: (20’s-30’s; A3-B5) A nun of the convent. Consistently perky, enthusiastic, easily excitable and is one of the more boisterous nuns.

MONSIGNOR O’HARA: (45-60; E3-G4) One of the heads of the convent. Constantly concerned with financial matters.

EDDIE SOUTHER: (25-40ish; Ab2-B4 Falsetto) The desk chief at the Philadelphia police station and a high school classmate of Deloris. Sweats profusely. He still yearns for Deloris after all these years.

TJ: (20-30; Db3-Eb5 Falsetto) Curtis’s nephew and one of his thugs. Deft and cognizant of the fact, constantly in a state of ignorant bliss.

SISTER MARY MARTIN-of-TOURS: (40-60) A nun of the convent. clearly in her own world.

SISTER MARY THERESA: (60-70) A nun of the convent, the oldest of the group. Decrepit at a glance, but secretly packs a punch.

LARGE ENSEMBLE: High school ages and up. Must sing and dance.
The Ensemble of Sister Act will be a FORCE TO CONTEND WITH! They will play multiple different rolls throughout the show including: Nuns; Altar Boys; Bar Denizens (Bar Patron, Waitress, Pool Player, Drag Queen); Homeless People; Fantasy Dancers and More!