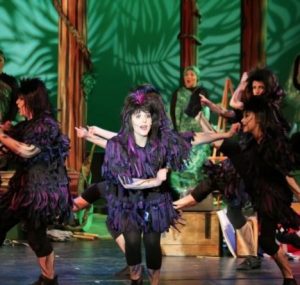 Follow a distraught Dorothy Gale as she is swept away on an adventure over the rainbow. Dorothy begins a journey down the Yellow Brick Road to get back home. With a new group of friends, ruby slippers, and her brains, heart, and courage in tow, not even a Wicked Witch can keep her from discovering the magical power of home.

Auditions will be held at the Alfred Rubin Riverwalk Community Center, located at 305 W. Jackson Ave. in downtown Naperville. Children must be in fourth grade or above to audition. Actors under age 16 may audition either on Saturday, Oct. 26 or Sunday, Oct. 27 from 1-2:30PM.  Actors age 16 and older may audition on either day from 2:30-4PM. Call backs, if necessary, will be held on Monday, Oct. 28 at 7PM.

Lead and supporting roles and positions in the ensemble are available for youth and adults.

Youth and adult actors are asked to prepare an up-tempo song highlighting their vocal range and to bring sheet music for the accompanist. There also will be a general movement audition for all and a dance audition and cold reading from the script. Check www.magicalstarlight.org/auditions for details about the characters, vocal range needed and frequently asked questions about the auditio ns.

All performances are mandatory. Eight performances will be presented the weekends of January 10-12 and January 17-19, 2020 at Naperville Central High School Auditorium, 440 West Aurora Avenue. Rehearsals will generally be scheduled for Sunday afternoons and Tuesday and Thursday evenings.

Magical Starlight Theatre is a program of The Naperville Park District.  Magical Starlight strives to include community actors and production staff of multiple generations in its productions, providing a unique opportunity for adults and young people to work together as peers and learn from one another.

ABOUT THE NAPERVILLE PARK DISTRICT
Created in 1966, the Naperville Park District is an independent, municipal agency serving the recreation needs of its residents. An Illinois Distinguished Agency since 1994, the District is one of only 1% of park districts across the country to be nationally accredited through the Commission for Accreditation of Park and Recreation Agencies (CAPRA). The Naperville Park District’s mission is to provide recreation and park experiences that promote healthy lives, healthy minds and a healthy community. The District maintains and operates more than 2,400 acres with 137 parks and provides more than 1,500 recreational, arts and environmental programs and special events annually. Included within the District’s operations are two championship golf courses, a multitude of playgrounds, trails, athletic courts and sports fields, Fort Hill Activity Center, Knoch Knolls Nature Center, two inline skating and skateboarding facilities, the Millennium Carillon, a paddle boat quarry, historic Centennial Beach, and the beautiful Riverwalk.