Auditions for "Bewitched, Bothered, or Be Murdered!" 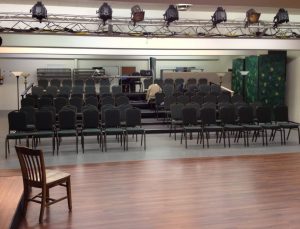 “Bewitched, Bothered, or Be Murdered!” features outrageous characters, nefarious deeds, hilarious comedy, and entertaining songs.  Auditions will be Sunday and Monday, Dec 16-17 at 7 pm at GreenMan’s theatre space. Auditions will consist of readings from the script with other actors, short improvisation, and a brief musical audition. Actors are encouraged to prepare 16 bars of a 1960s era song if they wish to be considered for a solo in the show. Musical auditions will be acapella, or with a track/CD provided by the actor.

Please arrive as close to 7 pm for the start of auditions as you are able.

The show takes place at a college graduation party, where witches and mortals mingle with unexpected results. There is a threatened hostile takeover of Darry and Larrin’s Ad agency. The family attempts to untangle the scheme, and solve a murder!

Parts for a wide variety of ages.