Auditions for "8 to the Bar," a 10 minute play festival 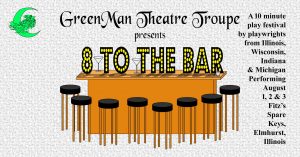 GreenMan Theatre Troupe of Elmhurst is holding auditions for “Eight to the Bar,” a night of new 10 minute plays by midwestern playwrights, June 23, 24 & 25.  In order to best utilize the time of actors auditioning for Eight to the Bar, auditions are by appointment only at GreenMan’s theatre space, located at First United Methodist Church, 232 S. York Street, Elmhurst, IL 60126.

To schedule an appointment, please email GreenMan10MP@comcast.net.   State your name and which day you would like to audition, June 23, 24 or 25.  Attaching a headshot and resume is acceptable but not required.  Details on what you need to read will be given to you when your appointment is scheduled.

1.  Actors will be scheduled for June 23, 24 or 25.
2.  Actors will be assigned a call time.  Afternoon for June 23, evening for 24 or 25.
3.  Actors will be assigned to a group and will spend 20 minutes reading for one group of directors, then 20 minutes reading for the second group.  You’ll be out in 40 minutes.
4.  Walk-ins will be seen *only* if there are any cancellations or open slots, so making an appointment is strongly encouraged.
5.  Those cast will be called by noon on Wednesday, June 26.  Actors who are not cast or called back will be contacted by e-mail.

Want to get onstage but you don’t have a lot of time in the summer?  Here is a perfect solution.  Come and be in a ten minute play.  Age ranges go from 20s to 50s.  Minimal rehearsal time – maybe three or four rehearsals before production week.  And you’ll have a blast.  Eight short plays were selected from over 30 submissions, written to the prompt “summer vacation.”  These are:

“THE TROUBLE WITH CASHEWS” BY DAVID MACGREGOR.  1 woman, 1 man.  Age range – 20s-40s
At a July 4th family gathering, a brother and sister watch with amazement as a ravenous aunt scarfs up all the cashews.  An emergency plan of action is called for…
DIRECTED BY MAUREEN MORLEY.

“BEACH PLEASE” BY MARY VILLAFLOR.  3 women, 1 man.  Age range – characters age through the play, from 15 to 70s.
The life of a family, in ten minutes.
DIRECTED BY MARK BJORKQUIST.

“IN THE JAR” BY MARK HARVEY LEVINE.  2 women, 2 men, 2 either.  Age range – open.
Two lightning bugs, a daddy longlegs, a praying mantis, a cricket and a male ladybug deal with the philosophical aspects of being trapped in a jar.  And of escape.
DIRECTED BY BECCA EASLEY

“AN INCONVENIENT TIME TO DIE” BY HELEN VALENTA.  2 men.  Age range: open.
A hotel clerk, an arriving guest… and a corpse.
DIRECTED BY JAKE MURPHY