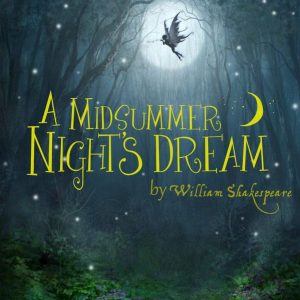 ​Auditions held at the theatre. Auditions are Open Call consisting of cold readings from the script.

Character Descriptions:
​(Some roles may be double cast)
Theseus – He is the ruler of Athens a war hero returned to lead his city in the political realm. and he is about to tie the knot.
Hyppolita – She is a warrior princess promised to Theseus.
Philostrate – Theseus’ over-worked but extremely loyal aide.
Egeus – A firm supporter of Theseus who has come to demand judgement over the arranged marriage that his daughter is refusing.
Hermia – Egeus’ headstrong daughter. She loves Lysander, but Daddy promised her to Demetrius whom she abhors. She is desperately seeking a way out of her betrothal.
Lysander – An affable Athenian youth who is head over heels for Hermia. Despite his state being equal or better than his rival, Lysander is not the man Egeus wants as a son-in-law.
Demetrius – With the reputation of being  “player” he has struck a deal with Egeus to marry Hermia. Now if only Theseus would give his royal “okay” life would be perfect.
Helena – She is a prize worthy of the best of all the eligible bachelors of Athens. Unfortunately, she is hung up on the only guy in Athens who wants nothing to do with her. Puck – AKA Robin Goodfellow. Puck is Oberon’s lieutenant and is known throughout fairyland as the chief troublemaker.
Nepala (first Fairy) – Titania’s messenger fairy who gets caught in the middle of the royal fairy feud.
Oberon – He is the King of the Fairies. He is mad at the Queen and wants revenge.
Titania – The Queen of the Fairies who has defied her King’s demands to turn over the changeling boy to Oberon.

Other Fairies include Moth, Cobweb, Peaseblossom and Mustard seed

Bottom – A weaver by day, Bottom is the most interesting person in the world according to Bottom
Quince – The poor soul tasked with directing these oddball mechanicals in a play for the Theseus’ wedding
Flute – A simple bellows mender who yearns to be a wandering night, but gets stuck with the role in drag.
​
Other mechanicals include Snug, Snout, and Starveling

About: The Albright Community Theatre is a 501(c)(3) Not-For-Profit organization that relies solely on volunteers for our productions. Our auditions are open calls that consist of cold reads from the script. If you are interested in auditioning, please arrive at least 15 minutes before the start time to complete paperwork. No appointment is necessary.   The Albright Theatre is located at 100 N. Island Drive on the 3rd floor of the Batavia police/government building.